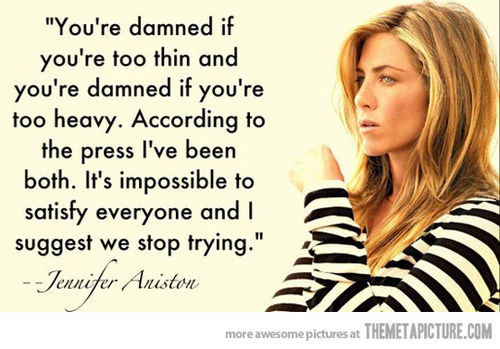 Why are women always body shaming other women? It’s common knowledge that we have a bad habit of body shaming women who are overweight. What isn’t talked about as much is that we also have a bad habit of body shaming women who are skinny–women like those who are models for Victoria’s Secret. Victoria’s Angels just presented themselves on the catwalk for Victoria’s Secret Fashion Show. Naturally, people are all over the spectrum on how they feel about the Show. Generally, there are four types of women in the world while Victoria’s Secret Fashion Show is on. The comedic women watch it for fun while eating junk food and cracking jokes about how “this is why I’ll never be a supermodel.” The insecure women watch it and judge themselves in comparison to the models. The cynical women watch it, or don’t, and bash the models based on preconceived notions that all models starve themselves. Then there are women like me, the indifferent women who don’t watch the show at all for one reason or another. I want to take a moment to talk to each of these four groups of women.

Cynical Women: Shut up! Didn’t anyone ever tell you that if you don’t have anything nice to say, then don’t say anything at all? Just because a woman is a model, that doesn’t mean she starves herself. Yes, it is possible and unfortunately probable that at least some of the Victoria’s Secret Angels have or have had eating disorders, but that’s not because they’re models. That’s because they’re women just like you who have insecurities and wars with themselves. I have had at least three friends who are models and two of them were actually very close friends of mine. One of them was Miss El Paso in Texas and another–who was one of my best friends in high schoool–has modeled for and been featured on Instagram by Neiman Marcus. I share that to say they are successful in their work and as far as I’m aware they do eat all the time or at least they did when we were in school and talked more frequently. From what I know about models, they can almost be looked at the same way one would look at an athlete. Most of them have incredibly quick metabolism and they’re constantly working out to keep their bodies in tip top shape. I mean, have you seen the shoes they wear? Those alone probably give them fab legs. I know my muscles are worked out when I wear my heels. Anyway, it’s really none of your business if someone is super thin or not. The only time you should care is if you genuinely believe someone has an eating disorder, in which case it is your responsibility to lovingly speak with that person whom you know and try to love and care for them so that they know they don’t have to turn to such drastic measures.

Insecure Women: Believe me when I say you are beautiful! You don’t have to look like Gigi, Bella, Kendall, or any of the other models on your TV screen to be beautiful! Yes, Gigi, Bella, and Kendall are beautiful! I won’t take away from that, because that’s one of the biggest problems we have as women in today’s society. We tear down the thin girls to make the average and heavier set girls feel better. We don’t have to do that. We’re all beautiful. I can say that because in high school, I was on the thinner side of my height to weight range and now I’m a little heavier than what my height to weight range should be. That’s okay though, because I know I’m beautiful no matter what. So are you! Whoever you are! Whether you’re the tween girl who’s just now facing body image challenges or you’re the middle aged mom who is still carrying baby weight even though her baby is the tween girl facing body image challenges for the first time. Know that you are beautiful! I know how tempting it is to compare yourself to the models you’re watching on TV. Like I said earlier, I know a few models and I’d be lying if I said I’ve never compared myself to any of them, but here’s the thing, models are human just you and me and every one is different. Look at all the Victoria’s Secret Angels, none of them look exactly the same. Even sisters Gigi and Bella Hadid don’t look the exact same. So don’t stress. If you’re thin, then don’t be afraid strut your stuff like it’s nobody’s business. If you’re more on the heavy side, then be like Fat Amy from Pitch Perfect and take pride in who you are even though you’re not the thinnest person in the room and just like the thin girl, don’t be afraid to strut your stuff like nobody’s business.

Indifferent Women: I am one of you. I am indifferent toward Victoria’s Secret Fashion Show. I don’t watch it. Half the time I don’t even know it’s happening until it’s happening and then there’s no point in watching it anyway. It’s okay not to care. You don’t have to care. I do want you to know though that if you’re like me, and you’ve suffered in the past from insecurities so that is a small part of the reason why you don’t watch the show, that’s okay too! If you know yourself well enough to know that watching something like that could potentially set you off into your insecure tendencies, then don’t watch it. The world won’t stop if you don’t watch it. On the other hand, if you don’t watch the show because you feel it’s degrading to women (a small part of me feels this way too) that’s also okay. As long as you’re not hating on the women in the show or hating on those who watch the show, it’s okay not to watch the show. If you do feel it’s degrading to women, then maybe try looking at it this way—these women are walking these runways in next to nothing and many of them are very confident in their bodies while they do it. While I do wish they would wear more clothes (that’s another discussion entirely), I also really respect them for getting up there and confidently strutting around in front of millions of viewers. It’s both empowering and inspiring to see women who appear to be that confident.

All four groups of women need to remember though, these models may seem to be very confident, but that doesn’t mean they are. Even the most confident women face moments, days, weeks, months, and or years of insecurity. They may be models who have bodies that much of the female population strives for but they are still ordinary women just like you and me. Despite how they are often presented to us, they are not perfect. Gigi even had a wardrobe malfunction during the show. As embarrassing as that may be for her, it’s also a good reminder for us that she’s human. She isn’t perfect. She has flaws and things don’t always go as planned for her either. I’m sure that she and the other models probably have days when they don’t want to do anything but sit at home all day and eat junk food. I’m sure that they sometimes miss their workouts just like the rest of us. Granted, it’s a part of their job to work out, so they probably don’t miss it as much as we tend to miss ours, but that’s the thing. It is a part of their job. Just like if we miss something in our own jobs, then it looks bad for us, if these models miss something in their jobs—like working out and eating right—then it looks bad for them. We’re all human though. We all miss work sometimes and you know what? That is okay. Who wants to be perfect anyway? Then we’d just be robotic and unrelatable.

If, by some chance, you’re reading this and you are an Angel or any other kind of model, I want you to know that I do think you’re pretty awesome. Not because you’re thin and look perfect to the public eye pretty much all the time, but because you are human and you still let people dress you up and take your pictures day in and day out while appearing to be confident 24/7. I admire you for presenting yourself as confident and put together. I hope and pray that you are as confident and put together as you appear to be. I also hope that you know you are beautiful, not because of how you look physically, but because you’re you! I bet you have an awesome laugh and that you’re super interesting and great to talk to! Rock who you are inside and out and remember to have fun!