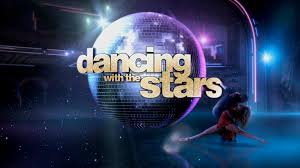 I like that the blue man group joined the opening dance.

Juan Pablo and Cheryl – Foxtrot – Oh, I like that Cheryl told him, “Enjoy it. Seriously, that’s all that matters.” Maybe I like her more now than before. I like that Cheryl describes the foxtrot as a really hard, but slow quickstep. I love when the dancers describe the dances in layman’s terms.

Oops, looks like there was a wardrobe/step malfunction as Juan Pablo tried to take off Cheryl’s glove. Otherwise, he seems to be doing well. It’s definitely a steamy dance as she described to him. Len comments on his frame and footwork, but believes he will be back next week. Bruno loved the choreography. Carrie Ann was impressed. She believes the technique was very good, but agrees it wasn’t perfect. I love Juan Pablo’s comment on dancing being a celebration of life.

Milo and Witney – Ooh, coming in hot dressed all in red. A little odd for a seventeen-year-old, but it works. Celine Dion sends a comment in for Milo and Witney wishing them luck with their Tango to her song. Ok, that explains the red. I like his competitive spirit. She’s amused that this is their first serious dance. He’s not a very serious person.

Oh, doing pretty well with the seriousness on the dancefloor. His form seems pretty good to my inexperienced eye. He almost seems a little too serious though; like he’s really trying not to laugh. It’s a great, fiery dance though. Steamy for the song, but appropriate for the boy. Great job to Witney! Bruno calls their dance the flight of a phoenix. Milo is so adorable. He’s so excited to get great comments. Carrie Ann comments on his frame and everything being great. Len comments it started out as an argentine tango instead of traditional tango, but he has no problem with it. His only critique is about Milo night dancing to his height.

Danelle and Artem – They’re doing the quickstep and she’s scared because it’s a lot of moves. Donny Osbourne is singing their performance and she’s excited.

They go for the casino vibe with their vegas dance. She dance with four of the trope dancers who take her to Artem. She seems to be doing very well with the quickstep, especially for someone who can’t see where she’s going. It’s impressive enough for people with full vision to dance so well, but for it’s phenomenal! Carrie Ann compliments Artem’s choreography as it worked so well for her. Len enjoyed it. As did Bruno. Danelle explains how she’s been able to make eye contact. She focuses on their voice and then looks above where their voices are.

Alexis and Alan – They’re doing the salsa. Alexis is self-conscious. Alan is a little frustrated with her, but he does comfort her.

Ugh, such a trashy song. It doesn’t seem right for a salsa. They choreography isn’t great in my opinion either. Alexis seems to being doing it well, but I don’t like this dance at all. I’m interested to see what Len has to say. He actually didn’t have anything against it. Maybe he’s decided not to comment on technique as much these days or I just don’t know what I’m talking about, but it still doesn’t seem right. Bruno, of course, loved it. Carrie Ann does comment on Alexis needing to keep her core tight, even though her lines are great. Erin’s questions are always so awkward. The judges make awkward faces to her comments too.

John and Emma – I love that both of them are dressed like Elvis. They’re dancing the Jive. He’s actually got the top-selling Elvis cover of all time.

I love this. It’s so funny! It’s not the smoothest Jive I’ve ever seen, but it’s not bad. Two other Elvis impersonators come out and so do two “fans.” It’s definitely no Derek Jive, but it’s a nice Jive. Bruno loved it, but felt the Jive was lost in translation. Carrie Ann didn’t believe it was as good as last night. Len was impressed thinking about them doing two completely different dances two nights in a row.

Yay! A dance from Jordan Fisher, Frankie Muniz, and the boy junior pros. So cute! They’re so great!

Damarcus and Lindsay – Dancing the quickstep to a Boys II Men performance. Aw, Damarcus was in a boyband in high school and they sang all the Boys II Men songs. That’s so cute.

I like the elegance of their dance. Quickstep can always go either way. I like this softer version of it. Looks like his frame and technique are pretty strong, but his shoulders are a little awkward. I wonder if the judges agree. Carrie Ann comments that he needs to be more careful with his shoulders and syncing in with the dance. Len comments the same. Lindsay comments it might before her fault. She’s not long enough to reach him.

They do the bar scene for their dance. It’s a western vibe for their jazz. He seems to be doing better, but I don’t know. He still seems awkward. Maybe it’s just him. He seemed a little awkward in Bachelor in Paradise too. Len doesn’t have any negative comments. Bruno tells him to come out of his shell. Carrie Ann comments on how confident he seemed after the dance. Joe doesn’t agree. She tells him he is improving, but he is still off tempo.

Evanna and Keo ­– The jive. I love how excited Evanna is about it. Ha, ha! He says she’s significantly weirder than weird! I love it! She really is Luna!

A desert vibe. Two hippies or Coachella attendees. Either way. Same vibe. This is a much better jive than whoever did it earlier! I get the jive vibes from it and I love it! It’s a fun dance and she seems to do it well. The judges love the performance. Carrie Ann feels it was a little ahead of tempo, however Len disagrees. He thinks her dancing could have been sharper.

Bobby and Sharna ­– I already know Vegas night was made for Bobby Bones! They’re dancing the quickstep. I love his joy for everything.

Magician vibes. His energy should be great for this dance. I wonder if his frame and line will be good though. I don’t know. It doesn’t seem super great. Still, he’s just so fun. Carrie Ann asks him to turn down his energy, but keep up his joy. He could be so great, but they don’t really get to see it. Len doesn’t say anything negative. Bruno tells him not to be so rough.

The dance a circ de so le inspired dance to one of their songs called storm. It’s perfect for the Paso Doble! Very intense and strong. Nancy seems to be doing a good job. She’s very fierce in her movements. Is it the right kind of fierce? Len felt the finesse was lacking. Bruno felt the dance was very busy and that she kind of just threw away her shapes. I don’t disagree. Carrie Ann does disagree.

Tinashe and Brandon – Cha Cha to “Circus” by Britney Spears.

You’ve gotta have a great dance to dance to Britney. I’m liking this dance. It’s kind of got mad hatter vibes though, which is funny. Bruno and Carrie believe Tinashe has great musicality. Len calls it a knockout performance, but critiques the sameness of the dances. I think that’s more to Brandon than Tinashe.

Mary Lou and Sasha – The Samba. Sasha says this is the hardest dance you can get. She’s commenting on her body hurting a lot from past injuries.

Showgirl vibes. Such a good dance, especially for someone dealing with so many injuries. I barely want to walk sometimes with my irritated injuries and I’ve only had like one major one. Hers have all been major. Carrie says she nailed it. Len calls it a proper samba. “I wish everyone would do what you do.” Bruno loved it too.

John and Emma in Jeopardy

Danelle and Artem in Jeopardy and eliminated; honestly, I think it sometimes just comes down to a popularity contest. Pretty much everyone else is well-known. She seems not to be so well-known. It’s a bummer.