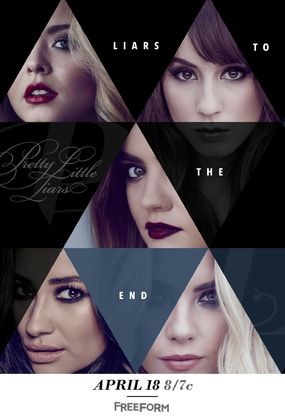 I guess, since I’ve spent so much time blogging about Pretty Little Liars, I should post something about the beginning of the end. The first of the last ten episodes will be airing later this evening. I wish I could say I’m excited, but I’m really not. Do I want to know what happened to Spencer and Toby? Of course I do! By the end of the last episode, I was still shipping Spoby and Haleb, but now I couldn’t care less if Ezria ends up together or not. Ezria was my ship in seasons 1-3 and I still held out hope for them through seasons 4-6, but in 7 I realized they’re a lost cause. Not because they won’t end up together, but because they don’t have the same chemistry they had in the first few seasons. Honestly, I think I’d rather see one or both of them be Uber A than see them end up together at this point. That or Aria can just end up with Jason (assuming he’s sane and not A or a minion, of course) because as twisted as it may be, I always liked them together too. I mean, part of me will still be happy if in the end all three main ships sail off into the sunset (I don’t particularly like Emily or Alison with anyone. I kind of them like them both single), but I won’t be super duper excited like I once would have been.

As for Uber A, at this point I don’t really care who it is. They screwed up everything so much with the CeCe Drake is really Charles DiLaurentis thing that I don’t see how they’re going to be able to save themselves. For a stalker show, PLL had been fairly realistic in most aspects up until the Charles Reveal (except for the whole Ezra writing a book thing, but that’s whatever).  As much as I really didn’t want CeCe to be A, it would have been an EXCELLENT reveal if she had been–not as Charles, but as CeCe, the big bad older college girl that kind of dated Jason and got kicked out of school by Alison. That would have been GREAT! Combine the facts that the CeCe is Charles reveal was a huge let down for a lot of fans, that they jumped five years into the future, and dragged the wait time between 7A and 7B out eight months and you’ve got a huge mess of a series finale that even the most obsessive of girls is really only going to watch so that she can see the end results of a show that up to this point seems to have just wasted a bunch of time and energy.

Don’t get me wrong y’all. I may still theorize and get excited over certain events, especially if they make up for the past season and a half, but no matter how obsessed I may seem, I’ll likely still just be watching to get it over with. That being said, there are still some things that I fully expect to see and get answers for.

And that’s really all I can think of right now, but I’m sure there’s other stuff too.

At this point, here’s what would have to happen for PLL to redeem itself for me: