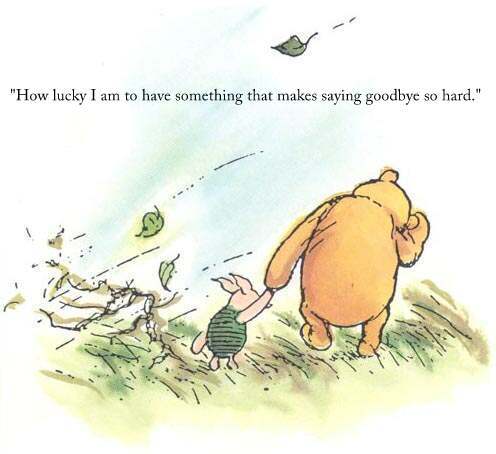 Have you ever had to say goodbye to a dear friend who was moving away? Have you ever grown apart from someone that at one time was your best friend? I’m no stranger to the feelings that come with growing apart from and moving away from former best friends. Nearly every person I’ve ever considered to be a best friend has grown apart from me and moved away. To quote Peyton Sawyer from One Tree Hill, “People always leave.” I’ve accepted that. It’s an inevitable part of life. People always leave.

I’m the kind of girl who is friends with everyone. I’ve had my fair share of best friends. I haven’t had a bunch of close friends though. I haven’t been open and transparent with very many people. Sure, I’ve been an open book on the surface, but only a few people have gotten past the surface, and only a couple people have really been allowed to see my heart. While all of my friendships have been incredibly valuable to me, I have learned that a lot of them have been fairly shallow compared to how deep a friendship can be.

Have you ever had God answer a prayer you didn’t realize you were praying until after He provided for you? In August and September of 2012, God did just that for me. He sent me to a new church where I met three girls who would change my life and my view of friendship. If you’ve read any of my other posts, then you probably know who I’m talking about—Shelby, Allie, and Holly. Within the first hour of knowing Allie and Holly I shared a deep, dark secret that I hadn’t shared aloud with anyone else. With Shelby, I’ve shared feelings about things I’ve had bottled up for years, sometimes even decades.

In the past, when most of my other friends have moved away, it hasn’t been that big of a deal. That may sound harsh, but it’s true. Before my friends have moved, we’ve already grown apart from each other, so it hasn’t been much different for them to move away. That and we haven’t exactly had the deepest of friendships to begin with. This time it’s different though. This time, as I prepare to say goodbye to a friend who’s moving away, it’s not someone who I’ve grown apart from. She’s not someone whose friendship is comparatively shallow to how it could be. This time, one of the best and closest friends I’ve ever had is moving not only to a different city or different state, but also to a different country. She’s moving nearly 10,000 miles away!

Nearly as soon as I met Holly, she and Allie moved to Austin, so our friendship has for the most part been one of long distance already. It’s only been an 80-mile difference though, so we’ve been able to visit each other at least every couple months. In December, she moved back home to live with her family until she moves half way across the world.

Since she moved back in with her family, I’ve seen her much more than I’m accustomed to seeing her. It’s been great, because we’ve grown even closer. If I’m honest though, it has also really sucked, because I know I’m going to have to say goodbye in less than a month. After she leaves, I don’t know if or when I’ll be able to see her again. I’d like to say I will visit her at some point, but right now, I don’t plan on it. I can’t stand taking flights. Altitude change, even the most minute, always makes my ears hurt really badly and a trip to visit Holly would require a day of travel just one way. Even if I didn’t have the concern of feeling the agony of altitude change, then I’d have to consider how expensive it would be to be visit her. It’d cost between $1000 to $2000 just to get to her, plus the expenses of actually visiting with her. That’s expensive. As much as I love Holly and would love to visit her, that’s just not a trip I could afford to take right now or any time soon. I don’t imagine she’ll be able to afford many trips home either. Therefore, there’s no telling if or when I’ll see her while she’s living overseas.

Also if I’m being honest, then I must confess that I’ve had moments when I’ve had to fight not to feel bitter and angry toward God for calling one of my best friends to live overseas. I know He gave her to me and placed her in my life so that she could help me grow in my walk with Him. So, it makes me sad to think that He’s calling her to live so far away that I can’t visit her very often, if ever. Those have been fleeting moments though, because the Holy Spirit has reminded me that this isn’t going to be like all the other times. I’m not losing a friend. In fact, I’ll probably actually get to chat with this friend more than I do now, because we’ll be on the same schedule. Right now, we live in the same time zone, but she wakes up at like 7am and goes to bed before midnight, while I don’t wake up until 2 or 3pm and go to sleep around 4 or 5am, because I work the night shift at a call center. Still, knowing that one of best and closest friends is leaving has left me feeling a lot more emotional than I was expecting to feel. I mean, for the most part Holly and I have had more of a text messaging and social media friendship than anything else, but I’ve always had the option of going to visit her if I had the time and money to drive 2 hours to see her. I won’t have that option now. Now, I really have to rely on God to give Holly and me the time to keep our friendship strong through technological means and probably some letters, because I’m a letter writer! Actually, that’s a great idea! Now I’m gonna tell her she has to write me an actual letter chronicling her adventures overseas. I wonder if she’ll have time to do that! ha, ha.

Anyway, the point in sharing all of this with whatever part of the world reads it is that God does provide. Even when you feel like you’ve lost all your friends–friends whom you were not as close to as you thought–He provides. Even when you’re praying for something, but you don’t realizing you’re praying for it, God provides. Even when you feel like God is taking away His provision, He provides. Yes, “people always leave,” but do you know what else Peyton Sawyer and all One Tree Hill fans learned? “Sometimes they come back.”

I have complete and total faith that one way or another, Holly is going to come back. Even if she doesn’t necessarily move back to the US—because if the Lord asks her to stay overseas, then she will stay—she will be here with me too. We have Facebook and text messaging. We can Facetime and write letters. She’ll still be here, even when she’s not and God will be here with me too. Even if Allie (who actually left too, but only moved to California), Holly, and Shelby were all to leave me and never talk to me again, then it wouldn’t matter, because God is here with me and He never leaves!