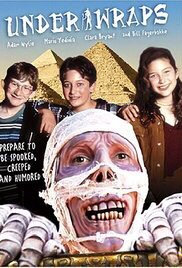 “Under Wraps,” aka the original DCOM, begins with cute, creepy crawly opening credits. We first see the main characters, apparently best buds, leaving a movie theater after watching a horror movie. Gilbert is seemingly afraid of everything, while Marshall is seemingly fearless. As they walk home, the boys pass the home of a scary old man named, Kubat. The boys decide to confront the old man, but are instead scared away. They run all the way to Marshall’s house, where Gilbert leaves him for the night.

After Gilbert leaves, we learn that Marshall’s parents are divorced and that his mother is dating someone. Her boyfriend seems very nice, but Marshall goes straight to his room instead of spending time with them. His mom follows him and they discuss how her boyfriend is a nice guy. He agrees, but still opts to stay in his room.

The next scene shows the boys eating lunch with a girl named, Amy, who informs them that Kubat died of a heart attack. The three of them decide to go investigating at his house. While there, they find a live mummy. At first he chases them and they’re terrified. Then he finds a bathroom and calms down after using it. Lets me honest, that’s kind of dumb, but also hilarious. 🤷🏼‍♀️😂 After that, they realize he seems to be kind.

As the movie progresses, the kids grow attached to the mummy and name him, Herold. Herold eventually finds himself at a museum where he finds his mummified true love. Unexpectedly, the movie almost becomes a love story after this. From this scene on, the movie is about three kids trying to reunite a mummy with his true love before it’s too late. Their greatest obstacle comes in the form of Kubat who wasn’t really dead after all. He was a museum curator who faked his death so that he could sell stolen artifacts, including Herold, on the black market.

After much adventure, Herold, Marshall, Amy, and shop owner, Bruce, get caught by Kubat and his goons. None other than scaredy-cat Gilbert saves the day though. Just in the nick of time, Herold is reunited with his true love. Marshall learns a valuable lesson about love and tells his mom to marry her boyfriend. Amy and Marshall also show signs of their own budding love story.

All in all, it’s actually a cute movie and I’m glad I finally watched it. Believe it or not, and despite the compulsion werewolves and especially vampires tend to have on me, I’m not really a fan of monsters. So, before this challenge, I never cared to watch this movie. Now I can say I actually recommend it at least once! If for no other reason that it’s certainly a great story to begin the legacy of Disney Channel Original Movies.