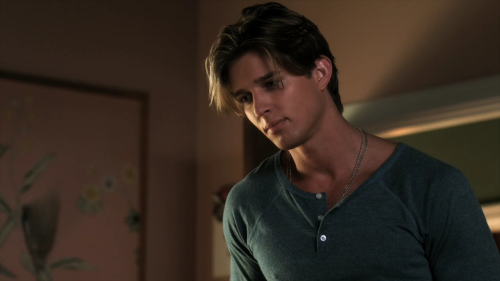 When I originally started writing this blog, my plan was not to write about who I think could potentially be “A,” but instead who probably isn’t “A” until the end of season five, but after tonight’s episode, a theory came to me that I just can’t shake and I really want to write about it, so I am! I read earlier (unfortunately I can’t remember where) that Marlene King allegedly posted something along the lines of “You’ll feel sorry for “A” when you find out who he/she is” on her twitter page. Then while watching tonight’s episode and thinking about it afterward,  I thought of an interesting, often visited, theory. Jason is “A.”

In an interview, Marlene said only one fan has ever figured out who “A” is. In another interview, she clarified that it wasn’t so much “who” the fan suspected that was unusual, but the “how and why.” So, who’s to say it’s not Jason? He’s had major connections to four of the five liars and has been scarce in some episodes and fully there in other episodes. To me it makes sense that he very likely could be “A.” In this post, I’ll list several of the reasons why I suspect him as being “A,” but by stating as many facts about him as I can think of.

Last thing we knew, Jason claimed that he could not remember any relevant details about the night Alison disappeared and Bethany was killed. After the incident, as he told Aria, he woke up to a note saying, “I know what you did.” One would suspect that Jason didn’t really do anything, but that “A” simply planted the note so that he would feel guilty. How do we know the real work of “A” wasn’t in fact that Jason was showing Aria the note in an effort to throw the suspicion off of himself? He also didn’t show up at Alison’s funeral. He may or may not have a good reason for that, but odds are whatever his reason may be, it’s not a good one. His sister had been allegedly murdered and he couldn’t even show up. Why? Was he the one who killed her? Or, did he know that she wasn’t really dead? Either way, it would take some inside scoops to know that information.

He has close connections with four of the five liars. First, he’s Alison’s brother and he always seems to take second place in the eyes of his parents compared to her, the sister he always seems to speak of in a jealous tone. Second, he is Spencer’s half-brother because of Jessica DiLaurentis and Peter Hastings’ secret affair. Third, he continues to seem to have a thing for Aria. He even kissed her in season two. If Jason were “A” and genuinely loves and cares for Aria, it would explain why the worst thing that generally happens to her is constant attacks on her relationship with Ezra, the man she chose over him. Fourth, as shown in the last two episodes, Jason now has connections with Hanna, because he allegedly slept with her mother.

The N.A.T. Club: Jason DiLaurentis was one of the founding members of the N.A.T. Club, a club created for the sole purpose of secretly watching and filming unsuspecting girls for entertainment. “A” is known for filming and photographing just about everyone in Rosewood, especially the Liars. If he is “A,” it would give more explanation for the pictures Spencer and Emily found in Jason’s tool shed of Aria sleeping. And, speaking of the N.A.T. club, he is the only founding member who is still alive. Coincidence or convenience? You decide.

Evidence? Most of the “evidence” anyone in Rosewood has found has allegedly pointed toward Alison and Spencer. Bethany, Jessica DiLaurentis’ possible other secret children, is dead. If that is true, then one of Jason’s sisters (whom also got more attention from Jessica than he did) is dead, another is in jail, and the other one is constantly being framed for people’s deaths. Maybe that’s why Jason was an alcoholic druggee in high school? Maybe he knew about Spencer and Bethany and just wanted to forget about it instead of confronting anyone, that is until after he graduated and “A” showed up, taunting Alison, potentially murdering Bethany, and stalking Spencer (and the other girls.)

Motive: Alison and Bethany were given more attention from his mother than he was, so he got jealous and decided to get rid of them if he could. This would explain why they were both there “that night,” why they were wearing the same clothes, and why they were both buried to be found in his biological father’s and half-sisters’ backyard. Spencer receives more attention from their biological father than he ever has. It would make sense that Melissa would be stalked too, but one must remember that Melissa was dating an NAT member and that she was seen with Ali and with the other two NAT members “that night.” That could have been his way of giving her an easy way out. Or it was simply that he knew she hated Alison as much as he did. Since the days when she wore pink highlights, Aria has always been a subject of his attention. He respected her and admired her for living outside of the box. He presumably thought she was beautiful (just about everyone does.) He kissed her. He allegedly took pictures of her while she was sleeping. She seems to get less of the brunt than any of the other girls do. Could this be because he is trying to spare her? Hanna replaced Alison as the “it girl” in school after she disappeared, maybe Jason didn’t like that? After all, Alison was his sister, even if he possibly tried to kill her. Finally, Emily also seems to get less attacks from “A,” than Alison, Spencer, and Hanna. Could it be because “A,” aka Jason, doesn’t really have anything against her accept the fact that she is close friends with Alison and Spencer?

My theory is likely faulty, but I didn’t really do any research like I have for my previous posts. However, even if it’s not the right theory, you must surely admit it’s a pretty interesting one? Anyway, tell me what you think? Could I be right or am I totally wrong? You decide!

P.S. I just remembered that Emily and Jason were connected for a little while in season (I think) 3!