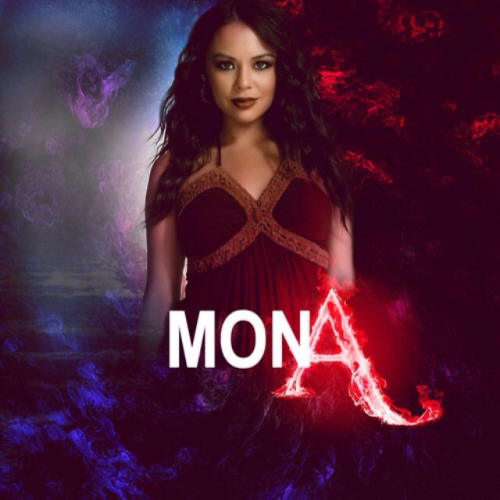 Warning: This post is chock-full of Pretty Little Liars spoilers. Most are from the first two seasons, but there are a few from season four as well.

Picture an uber nerdy, basically friendless girl who is one of the main targets for the school mean girl. What if that mean girl disappeared? Would you blame the nerdy girl if she took her chance to become the new “it girl?” Would you blame her if she took the “weakest link” in the original “it girl’s” clique and became her best friend? I highly doubt anyone would say anything to her for either of those things. But what if, after all her hard work, the nerdy girl felt like she was losing her new best friend to her old friends? And what if she felt like the only way to get her back was by torturing the girls in an attempt to break them up again? Now, that is something to talk about! So, let’s talk about Mona Vanderwaal, but first let’s talk about Alison DeLaurentis, the “it girl” who picked on Mona.

As Hanna Marin described, Alison DeLaurentis is the kind of girl who can simultaneously be your best friend and you worst enemy. She knows exactly how to make you feel like a precious diamond, even when she’s treating you like a piece of trash. No one knew why she wanted to be Alison’s friend, but every girl did, especially Mona Vanderwaal. Before Mona could join Alison’s team of “it girls” though, Alison was murdered. At least, that is what the police led everyone to believe, even though it was untrue. The truth is, Alison DeLaurentis faked her own death and Mona Vanderwaal helped her do it. Why? Because if you can’t join them, beat them.

After Alison left Rosewood and the polar opposite girls from her clique fell out of touch, Mona made her move. She befriended “Hefty Hanna” Marin, the “weakest link” from Alison’s clique. Together, they turned themselves into the school’s new “it girls.” More than that though, they became best friends. After a year though, Hanna and her old friends started to reconnect, unintentionally leaving Mona feeling left out again. Because she was afraid of sliding back into her old role as the friendless girl she used to be, Mona decided to do whatever she had to do to keep Hanna as a friend. Every Pretty Little Liars fan knows what Mona did to the girls, but unless you have rewatched the first two seasons, you may not know how she did it. That is what this post is about. I am going to share some of the things I noticed when rewatching the first two seasons of PLL.

Season One
In season one, there were five major clues I noticed about Mona that helped the whole “Mona is A” thing really come together for me. I identify the clues as “Shoplifting,” “Camp Mona,” “Welcome Home Hanna,” “Heartbreaker,” and “Heartbroken.”

The pilot episode introduces Hanna and Mona as shopping buddies who walk straight past a security camera while wearing stolen merchandise. Somehow, Hanna is the only one caught and charged for the crime. That never made sense to me. Why on earth would Hanna be the only one caught? Surely, “A” was not above going after a close friend. Why should (s)he be? After watching it with a new perspective, I understood. Mona was A! “A” wouldn’t let herself get caught for something so trivial.

One of the most obvious “Mona is A” clues was “Camp Mona.” First, we see Mona invite “Hanna and her clanna” to go “glamping” with her. Then she walks away and the girls start looking for reasons why they can’t go with Hanna, until “A” sends them a text saying (s)he would be there. The next day, Mona claims she received a text from someone called “A” and uninvites Hanna from her party, even though she knows she’ll go anyway. At “Camp Mona,” we hardly ever see Mona, and that is because “A” is busy sending the girls on a wild goose chase.

Less obviously, Mona also gave us a clue at Hanna’s house right before the surprise “welcome home” party. She said, “Whoa, what was that? I just saw a shadow at your door.” As I’m sure Mona intended, Hanna started freaking out. There were many other ways that Mona could have set Hanna up for the surprise, but she chose the creepiest way. Why? Because Mona is “A!”

Also less obviously, we were given a clue that maybe “Mona is A” when Hanna was told to break Lucas’ heart at the dance. Who, other than maybe Alison, would care enough to make Hanna break Lucas’ heart? Mona, that’s who!

Finally, when Caleb left a letter for Hanna with Mona, she ripped it up and threw it away. When questioned, she claimed that it was to protect Hanna. That was a lie though. We know that in those episodes, “A’s” main goal was to break Hanna’s heart. As Hanna’s best friend, Mona, aka “A,” knew that the best way to break Hanna’s heart was by making her believe that Caleb left without saying goodbye. It worked.

Season Two
Now for the “Mona is A” clues from season two that led up to the big reveal—“The Cafeteria Scene,” “Truth-Up Day,” “The Cellphone,” and “Never Around.”

After Dr. Sullivan suggests that the girls spend time apart, there is a scene in which the girls sit at four different tables for lunch. We see a shot of Mona with the hint of an evil smirk on her face before the camera moves away from her. Next thing we know, the girls receive a text from “A.” “Look at you. All alone in a crowd. I win! Xoxo – A.”

Throughout the episodes of season two, we see Mona trying to befriend Hanna’s other friends, Aria Montgomery, Emily Fields, and Spencer Hastings. In the “Truth-Up Day” episode, Mona goes as far as to hack into the school computer, collect classified information, and get out without being caught, all to help Emily get back on to the swim team. This should have been a dead giveaway for all of us. Mona is supposed to be clueless and Caleb is supposed to be the only tech savvy person in school.

As Ashley Marin and Ella Montgomery, Hanna and Aria’s moms, get closer and closer to finding out about “A,” Hanna destroys her phone so that no one can see her texts from “A.” She gets a new phone though. From who? “A” herself—Mona Vanderwaal.

Finally, did you ever notice who was never around when the girls got “A” messages? That’s right. Mona!

Mona was “A” and it all makes sense now! Mona had her moments when it was so easy to like her or at least to believe she was too clueless to be “A” and that is what made her the perfect suspect! In the end though, she will always be one of my favorite characters. Sure, she was manipulative, sinister, and a bit psychotic, but she was not heartless. In fact, I believe she had one of the biggest hearts in Rosewood. She was just a broken-hearted girl who never fully recovered from being bullied as a kid. All she wanted was to be loved and accepted by “it girl” Alison DeLaurentis, “cute boy” Noel Kahn, the other girls, and most importantly her best friend—Hanna Marin.

Until next time this is Brittany Alexandria, daring you to keep obsessing over the things you love! Because we could always use more hope and passion in this world! xoxo

Find my podcasts “The Mask; Her Aid” and “Obsessive Girl Podcast” on your favorite podcasting platforms.

Buy my book “The Mask; Her Aid” by Brittany Alexandria on Amazon for Kindle.